The Unharm Queer Contingent came together in January 2016, catapulted into action by shared anger and frustration about the policing of queer and other urban spaces with drug detection dogs; concern about the gradual disappearance of Sydney’s queer party spaces; commitment to progressive drug policies, especially the decriminalization of drug use, and intertwining histories of enjoying and caring deeply about music, community, diversity, social justice, play and pleasure.

By 2016, Sydney-siders and nightlife communities had suffered two years of the Sydney lockout laws, which were turning Sydney after dark into a ghost-town.  And not in a good way.  Without a vibrant and accessible nightlife, where would queers of the future and other misfits go to find each other, form community, experiment with their feelings, selves and relations, share their pleasures and sustain themselves?

Most of us, especially those who had lived through the grim parts of the HIV crisis, had a keen sense of the connections between nightlight, collective pleasure, queer community-formation and effective cultures of care.  We knew that many of the most innovative responses to harm and risk and the prevention of danger relied on the sense of collectivity and care generated and sustained in queer party spaces over the 80s, 90s, and 00s.

We came together as volunteers, with no budget, and very different sets of skills and forms of expertise and experience.  Over 2016 and 2017 we staged a number of interventions and events that aimed to demonstrate and reaffirm queer folks commitment is community, care, and the possibility of mobilizing around questions of bodies, pleasure, health, care and resistance.

Using funds we raised from generous donations from community members in response to a quick video we threw together in Taylor Square, we produced information and education resources for a Mardi Gras Fair Day Stall 2016. This was a great opportunity to let people know about ourselves and our mission, identify supporters, and promote Unharm’s two main campaigns at that time, Ditch the Dogs and the beginning of the campaign to establish pill-testing services in Australia.

Ditch the Dogs raised up the need for public spaces to be free from intimidating police surveillance operations with drug detection dogs and personal searches. Research by Unharm in 2014 updated the damning findings of the 2006 NSW Ombudsman’s evaluation of the ‘sniffer dog’ program. Despite the Ombudsman’s recommendation that the program end, we found that searches continued at a high rate, rarely found drugs, increasingly involved strip searches , and in Sydney were targeted towards Redfern area. This work gave a huge boost to the profile of this issue and helped support the launch of the Sniff Off campaign by the NSW Greens. Since that time, we’ve seen the annual number of searches during these operations decline, though there is more work to be done here to eliminate these invasive and counterproductive operations entirely.

Around the time that the profile of the drug detection dog campaign began to rise, we realised that we needed to be proposing solutions - especially, better ways to promote safety at parties. The idea of testing drugs, and telling people what was in them before they made a decision to take them or not, had been around for some time - in fact, there had been an underground ‘pill testing’ service established in Australia in the early 2000s. A growing number of testing services around the world were demonstrating the feasibility and practicality of this kind of service, and a growing body of evidence was demonstrating that it was an effective way to reduce risks and promote safety. Australians supported

Unharm published a high-quality, peer reviewed policy brief that became a news story in itself and had a huge impact across allied organisations, helping a broad group of advocates and activists to understand and communicate the case for pill testing. This all helped lay the groundwork for the pill testing trial recently announced in the ACT.

Unharm has done and publicised research with Essential that found most Australians support pill testing. With Melbourne mother Adriana Buccianti, Unharm launched a petition that’s been supported by close to 40,000 people and set up a website for Australians to contact their local MP to encourage them to support pill testing. Unharm has also established a campaign site to help organise the music festival community for campaigning on this issue and for promoting safety more broadly.

The pill testing campaign is a priority for Unharm going into the summer of 2017-18, kicking off with upcoming events in Sydney and Melbourne.

Fair Day 2016 was a pretty huge day, because that afternoon was the first massive Keep Sydney Open rally, which pulled thousands of Sydney-siders into the city streets to protest the draconian lockout laws that were killing nightlife in our city. Because we had such a strong sense of the connections between nightlife and community formation and wellbeing, we decided it was important to join the rally and have a visible presence there 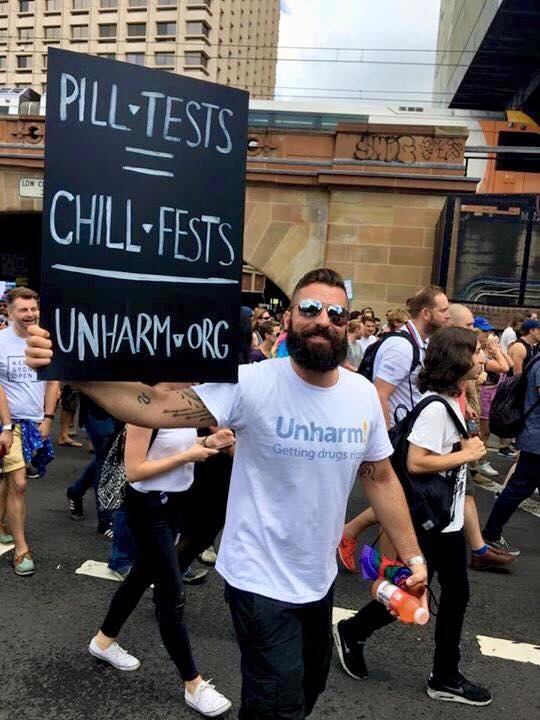 Just as important was the Reclaim the Streets rally, a month or so later, and many from the queer contingent joined this massive throng to protest the NSW licensing laws by marching, dancing and prancing our way down to the Crown Casino – a venue that was magically exempted from the lockout restrictions – protesting the NSW Liberal government’s hypocrisy.  We smelt foul play! The rally was colourful, loud, brash, irreverent, fierce and energizing.  Serkan Ozturk captured some of the colour and movement in this video

Queer contingent members have protested and written about the connections between community-formation, mobiisation and nightlife to engage different professional, communal and activist publics here, here, here and here

As events, community forums have always been important within queer community to identify common issues of concern, educate each other, and come up with shared understandings of problems and solutions to particular situations.  In April we convened a forum, Queer Chemistry, at the Beauchamp Hotel, where a panel of queer spokespeople, harm reduction experts, peers, and cultural producers.  Topics ranged from drug policing, care strategies at parties, and the significance of party culture in queer lives, past and present.  The forum attracted over 100 people and we had a wide-ranging discussion that was reported on by Triple J’s Hack and the Sydney Star Observer

A couple of months later, we organized a film screening and community discussion at the New Theatre in Newtown, where we screened the documentary Rampant: How a City Stopped a Plague, which tells the story of how a group of ‘ratbags’ –  ‘junkies, poofters and whores’ – organized themselves to construct one of the most progressive community responses to HIV/AIDS in the world.  The panel discussion brought together key activists, past and present (including some who were there when the crisis hit Sydney) to reflect on this history and consider its relevance to present struggles around nightlife, risk prevention and struggles over nightlife, community and street culture in Sydney today .

We set up the Unharm Queer Community Forum on Facebook to provide a forum for members of our communities to exchange information, ideas, stories and news about drug policy problems, setbacks and successes.  It’s a closed group, which you can join by request, and which currently has 800 members.

In response to growing concern over accidents associated with the use of GHB/GBL at queer parties, and the police response to these accidents, which we believe has been misguided, in June 2017 we held a G Community Forum, at the Beauchamp Hotel.

In October 2016, Unharm’s queer contingent threw an outrageous party to celebrate sexy demons, queer community, the growing movement around drug use, and killer dress-ups. Held on the weekend of the Day of the Dead, UNDEAD was the brainchild of Fiona McGregor; who put the party on with the help of comrades from the Unharm Queer Contingent, their mates and supporters.

This wasn’t “just a party”, it was serious fun. UNDEAD aimed to pay homage to the role queer parties have played in promoting vital practices for wellbeing: lively communities; cultures of care; and the invention of forms of safety that realise the transformative powers of pleasure.

But most of all, UNDEAD was one of those thrilling events that demonstrates how inventive, playful, daring and caring our community can be. We were blown away by the creativity, guts and sheer nerve of all the queer souls who came out in the middle of the night to claim the dance floor and support the growing movement.

Renowned photographer William Yang captured some of the magnificent creatures who graced our party – check out his pictures of the event here (further snaps from SXNews here). To summon the ghost of Oscar Wilde, let’s just say that reports of the death of Sydney queer culture are greatly exaggerated.

Thanks to the generosity and courage of those who joined the party, UNDEAD raised over $7,000 for Unharm, which the organisation has used for a number of important initiatives and internal training and strategic development processes over 2017. The biggest thing that these funds enabled was for Unharm to work with The Change Agency in an ongoing process of expanding leadership, developing campaign strategy, training activists, and introducing a new operating model. A campaign planning day, supported by The Change Agency including through training Unharm activists in facilitation, helped refine Unharm’s mission as a campaigning organisation, provided strategic direction and highlighted the importance of promoting equity for people who use drugs across our campaigning work.

This has set Unharm to grow as an organisation, and to help grow the movement - work that is, of course, ongoing.

UNDEAD was such a success, and such an energizing and awesome expression of the creativity and inventiveness of queer community, that we’re throwing another one, this time at the Oxford Art Factory, with the theme POLITICAL ANIMALS.  Find out more here and get your tickets before the last minute rush!  At a time when queer communities are under assault with an intensity unmatched since the early days of Mardi Gras, it’s bound to be huge. Flock to it!

Want to get involved in Queer Contingent? Email qc@unharm.org to find out more, and you can join the Unharm Queer Community Forum, and get your tickets for UNDEAD II now!